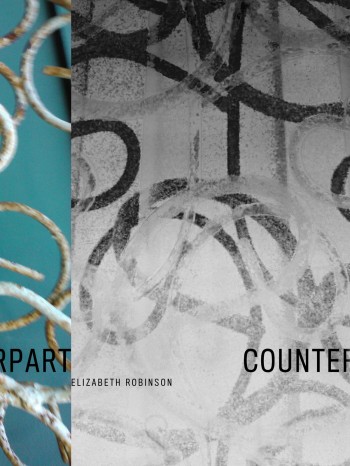 For twenty years Robinson has been making language do new things, and for a wonder she’s never afraid of that shadow of words we call affect. In this new collection her precise ear and sense of line sustain a poignant austerity of gesture. She knows that the real dark is the one we keep inside, and her lines scratch at the shell. Her exuberant imagery is chastened here, focused—image names meaning. She probes macabre spaces, golems and hells and devils, but not the ones our culture knows—these are the proper monsters of her self-encounters. The book is exciting in its silverpoint tracing of the complexity of our “dubious desires.” —Robert Kelly

In Robinson’s most recent collection, “identical merges with identity.” Written in airy, magnetic language, the poet explores “bifurcations of the self,” layers of self and language that we fear to confront because of their sinister, unpredictable traits. The collection’s eight sections are separated by epigraph-like fragments from other voices that reverberate in Robinson’s own poems. “Sanctuary,” blurs two selves. The thief and the victim become the same: “do you mind, she asked,/ if I steal a bit from you.” This phrase changes, becomes ‘murmured to myself, and then the meanings of the words shift: “bit as in bite,” pulling the rug of meaning from under our feet. Language, in Robinson’s hands, is unstable, warped, and deceptive. Her poems roll over and over in quickly changing permutations: “the frail opening from/ ration to rational.” Like Narcissus crashing into the lake to capture his other self, “how better to translate,” Robinson writes, “than to destroy.” —Publishers Weekly

Map the themes/ground covered between Hell & Heaven . . . whitespace, the all-steady-hand. The copy / the double / the reflection: as the ‘identical merges with identity’ we look inward for/to the self. Robinson’s lyricism functions as guide & delusion; as to find the self is both necessary and unachievable. Must read. —Ostrich Review

Despite the desire for “pronouns to take on the corporeal,” to accurately name and give shape to the uncanny, they resist such easy definitions for “they are like the static of a sick-dream, / almost amenable and at the same time, / frizzy, off their marks.” Readers are confronted with an uncanny other, one who is like and unlike us, a macabre Narcissus ‘”fascinated with its own blood.” In exploring this other, the speaker envisions flesh as a possible point of entry: “Here’s a fleshy zipper / that opens in my belly, and I unzip and open and then / there I go. Inside and down the path.” —Aromi Lee, Verse Online

Robinson’s terse, minimalist idiom recalls the work of Niedecker and Oppen, Barbara Guest and Michael Palmer, but it’s an idiom she has made entirely her own through a subtle and exacting deployment of measure and a provocative confrontation with postmodern theology. The scrupulous and tender inquisitions of her earlier work, from In the Sequence of Falling Things to Pure Descent, place her in a small group of contemporary poets (Pam Rehm, Peter O’Leary, Liz Willis, Andrew Joron, Lissa Wolsak, Joseph Donahue, Claudia Keelan and David Miller are a few names that come to mind) whose engagement with the recovery of a radical ontology marks them as some of the most daring poets now writing. By daring, I don’t mean the kind of typographical quirkiness or archly bloviated theory-sprach associated with so much work currently lauded as vanguard. . . . The kind of daring found in Robinson’s poetry evinces a spiritual courage and moral acuity that recalls Simone Weil and Abraham Joshua Heschel. Her deeply informed suspicion of language has not robbed her of an underlying assurance in the hermeneutical circle of meaning. There’s a willingness in her poems to grapple with the aporia of faith and doubt that places her in a line extending from Hadewijch of Brabant and Julian of Norwich to H.D., Robert Duncan and Fanny Howe. —Patrick Pritchett, Jacket

The problem of how we understand the words of others—or of ourselves—is poignantly explored in Robinson’s poetry. And yet, even now I feel that I am over simplifying the case and reducing Robinson’s work to something not altogether accurate either. It is, after all, here, a conversation—Robinson to Robinson—but any attempt to listen through the poem guides her readers toward new possibilities of meaning. —Dale Smith, Bookslut

Elizabeth Robinson is a poet who, over the span of several books, has created a language that is uniquely her own. Sparse without nearing empty, pared down without ever feeling over-edited or contrived, Robinson’s work belongs to a school of writing all its own. Certainly a part of the lyric tradition but also influenced by a spirit definitively experimental in its nature, Robinson’s poems are both studies in intensely felt human emotion and in the alternatively slippery and concrete ways in which words can function.  —Marisa Siegel, The Rumpus

Counterpart plays with what the title suggests, composing pieces that explore comparisons as a study of motion, counterparts, counterpoints, doppelgangers, Golem, twins, the repeated binary and what else the mirror holds. . . . Whatever its name, the “other,” her poems suggest, is never as far away as one might hope, and close enough to perhaps have quite an impact. Or, as she writes in the poem “WANDER”: ‘And so all matter is made of words.’  There is such a vibrant energy to Robinson’s lines, composing straight phrases with linebreaks that sparkle and spark across meaning and speed with such an ease as to make any other writer jealous. Elizabeth Robinson is easily becoming one of my favourite American poets. —Rob McLennan